Our user panel TellUs gives us a lot of useful information. For example that 82% of the people with Spinal Cord Injury have problems with their bowel. But there is still a stigma attached. Only 29% of the panel members were asked about their bowel by a healthcare professional, while 68% wanted to be asked... Sometimes the knowledge is poor, and sometimes it's just hard to get over the embarrassment.

Our guest blogger Kent Revedal has a clear stand on this matter - this is his direct plea to the healthcare professionals out there! 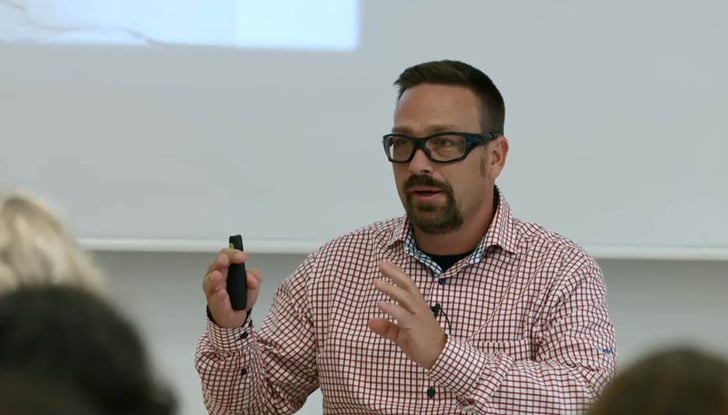 A few weeks ago a friend of mine contacted me and asked for advice. The person had some serious problems with the bowel and his regime. Our common denominator was that we both had suffered a Spinal Cord Injury (SCI) a few years back. Typically, someone with a SCI will experience bowel issues.

My friend had read my previous blogs about my experience with transanal irrigation (TAI) and now turned to me for some advice. He had used laxatives for several years to stimulate the rectum when he needed to empty his bowel but had found that its efficiency had decreased over time.

The result, beyond personal frustration, was that he had to spend more and more time in the bathroom, something that affected his personal and social life. You could hear the frustration in his voice, underlined with a distinct tone of sadness.

In my business life I run a rehab company, and through that I meet lots of people with different kinds of disabilities. Most of them with neurological injuries or diagnosis. Time after time we meet frustrated patients that can't seem to find a working regime with their bladder and/or bowel.

Stuck in the first step

It's so saddening to meet people who have to wear diapers on a daily basis or are limited to a very strict diet just to try to get the bowel into shape, normally without any improvement. Often these circumstances are compounded by the decreasing effect of laxatives over the years.

Sitting down on a one-to-one meeting and listening to them makes me both sad and frustrated at the same time. Sad because it's often a real tragedy. Frustrated because I think they experience problems that can be remedied or at least greatly improved. But few professionals seems to care.

In bowel treatment there is a pyramid that has been used over the last few decades to identify the steps in order to help people with constipation problem. 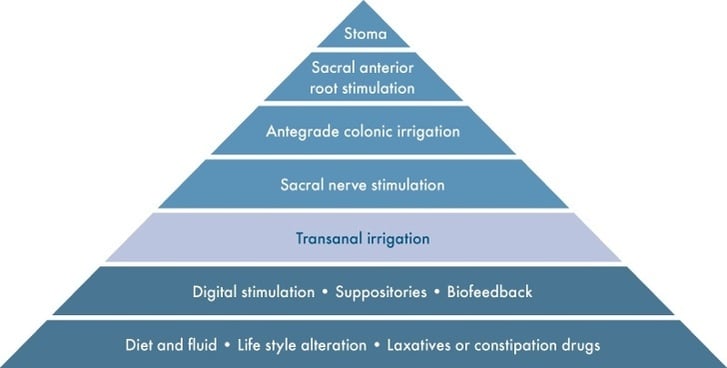 In the bottom we normally find various kinds of diets, probiotics and at times lifestyle changes. It's natural to start there and see if this can remedy the problem. I totally agree with the idea that you should not do more than needed. You don't bring a bazooka to kill the flies. But for those of us that have a neurological bowel dysfunction it's normally not enough to use the tools in the bottom of the pyramid. Unfortunately a lot of us have to stay in that regime for extended periods before we get any further help.

From all the testimonies I have been entrusted to hear, I also see that doctors and healthcare professionals have way too little knowledge about the following steps. More than once I have met people who had spend years with laxatives and countless hours in bathrooms trying to make it work. When they confront the doctors with their frustration, stoma comes as the next alternative!

The first time I heard that I almost fell out of my wheelchair. How could anyone first spend years on the bottom of the pyramid and then, when it does not work, its suggested they go all the way to the top? As you can see in the picture above there are several steps in between.

Why is it that it takes so long to move up in the pyramid?
Is it just a conservative approach or is it actually ignorance about the different steps?

Earlier this year I had the privilege to speak to an audience from a hospital in Sweden. They worked with urology patients. When I talked about TAI a few of them did not even know what that was. I had to explain the term and function. To professionals in that particular field!

Do I expect too much from you professionals? I hope not. If you work in urology you should know that bowel and bladder affects each other and if you have problem with one of them it's likely that you have problems with the other one. Especially if you have a neurological diagnosis or injury. You should be able to help and assist people along the way. And more than anything else, ask the patient!

Let's move up in the pyramid

My direct plea to the healthcare professionals who work in this area; please do not hold people too long in the base of the pyramid, assist people in exploring other options along the road to find a working regime. I urge you to move up a step or two faster and be slower and more patient before you move all the way up to surgical solutions thats truly invasive, such as nerve stimulations or stoma.

If the bowel works it provides the basis for enjoying a social and somewhat normal life. Even with severe disabilities. Please listen to us and help us.