What tools are available to manage Lower Anterior Resection Syndrome?

To address the lack of a standardised approach for the management of LARS, a bowel management program, called BOREAL, was developed and evaluated in this study, aiming to highlight the acceptability, feasibility and effectiveness of timely assessment and treatment of LARS. 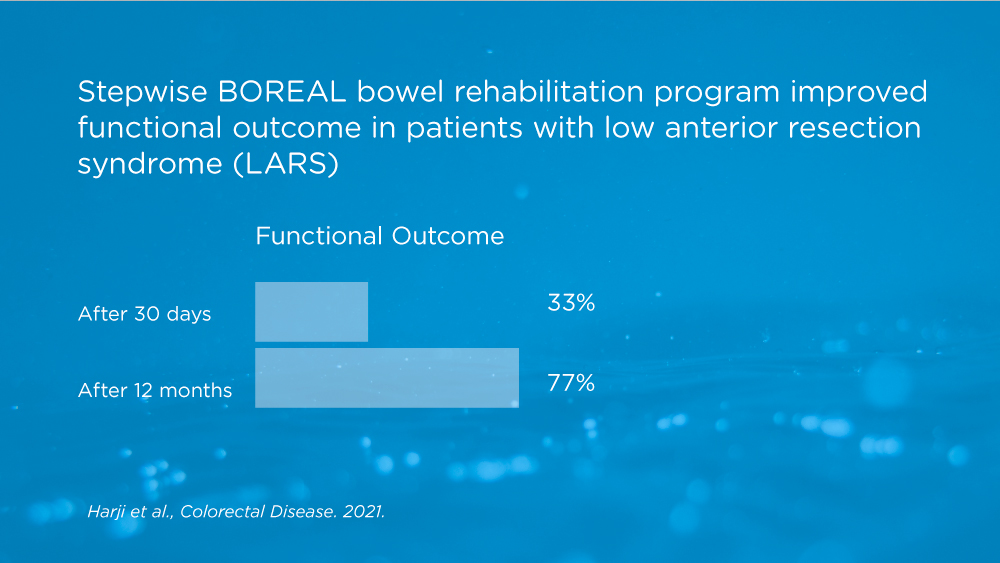 Lower anterior resection is a common after sphincter-preserving rectal cancer surgery and can contribute to long-term bowel dysfunction with a profound impact on patients' quality of life (QoL). Treatments consist of a combination of lifestyle, pharmacological and interventional strategies, with varying efficacy and are often implemented once symptoms appear.

To address the lack of a standardised approach for the management of LARS, a bowel management program – BOREAL – was developed and evaluated in this study. It consists of a series of stepwise, evidence-based and practice-based measures aimed at improving LARS symptoms based on continuous postoperative assessment of LARS scores over a 12-month period. Treatments in the stepwise program were:

Functional outcomes were assessed with the LARS score and Wexner faecal incontinence scores at 6 specific time points after surgery. Depending on the result of the scores, treatment was decided.

At the first assessment 30 days after surgery the functional outcome was:

After 12 months in the BOREAL program:

During the program, most of the patients did not have to progress from the first step and adherence to the program was good.

In conclusion, the BOREAL program provides a structured approach to patient assessment and treatment for LARS. Compliance with the program improved functional outcomes and a stepwise program is a feasible and effective way to detect and treat LARS.